Writing yesterday, I observed that Labour’s pro-Brexit positioning was unfathomably removed from both:

its 2015 Voters (65% or 63% of whom voted Remain) and its MPs (218 for Remain versus only 10 for Leave) in light of polling showing limited support for a Brexit without strings.

My post yesterday speculated that Labour’s present pro-Brexit positioning was likely to be borne of two defensive factors: first, a need to keep the red tops onside and, second, perceptions of the effects of keeping the door ajar on Labour’s vote share in 2020.

Of the first I said:

Faced with a vigorous and scornful media [Labour] seems determined to repeat its mistakes from the last Parliament. Then MPs bowed their heads regretfully to ‘overspending’ allegations and the need for austerity. Now they genuflect to demands for a Brexit that ignores the limitations of the mandate.

The additional point I want to make today is this.

Few, if anyone, is suggesting voting against triggering Article 50 or somehow otherwise blocking Brexit. What is being suggested is that Labour should in the A50 Bill leave the door ajar to a second referendum.

And, critically, the relevant time to judge the popularity of that course is not today. We don’t have a general election today. It will be in 2020, when we do.

By 2020, MPs will already have voted on the article 50 deal. That vote will probably have taken place in early 2019. If the evidence in 2019 is that the economy is performing well then, of course, Labour will, and rightly, support the Government’s Brexit deal. There will be no second referendum. And MPs in Leave voting constituencies will not face a Brexit penalty at the polls.

If, on the other hand, the evidence in 2019 is that the economy has tanked, inflation is rising, living standards have slumped, and the deficit has ballooned MPs would be applauded for having in the Article 50 Act enabled a second referendum. Far from being punished at the polls, Labour will benefit in 2020 from being the Party that delivered a way out of the mess.

So the very best that can be said about the argument that Labour shouldn’t support a  second referendum because voters in Leave constituencies won’t like it is this. It’s an answer to the wrong question: ‘what is popular today?’

The worst thing that can be said, the really unfathomable thing about Labour’s decision to rule out a second referendum now, is this: it has the option. It can wait and see. It can have its cake and eat it too.

But instead it is doing neither.

The following two charts show Labour seats in England and Wales by margin of victory, support for Brexit and (by colour, Runner Up).

The first shows all Labour seats.
The second highlights those Brexit supporting seats where Labour’s margin of victory was less than 15% (they total 44: 39 Conservative, 3 UKIP, 1 Lib Dem and 1 Plaid Cymru).

The second highlights those Remain supporting seats where the winner’s margin over Labour was less than 15% (they total 18: 14 Conservative, 2 Lib Dem, 1 Plaid Cymru and 1 Green). 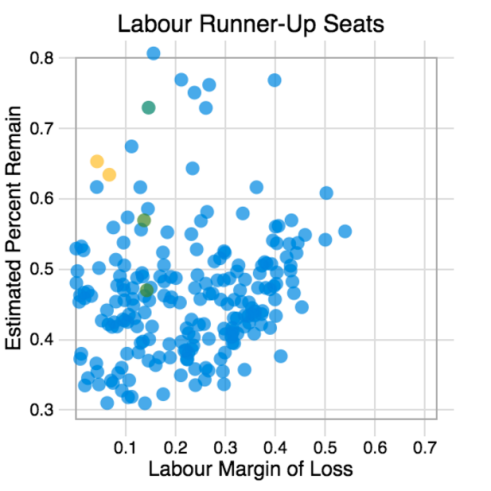 3 thoughts on “Labour and Brexit. Against having your cake. Against eating it too.”