Here’s an exchange from Hansard between George Osborne and Angela Eagle yesterday:

Note, in particular, that George Osborne said of Google that it “paid no tax when the Labour party was in office.”

Here is an extract from the accounts of Google UK Limited, Google’s UK subsidiary, for the year ended 31 December 2007: 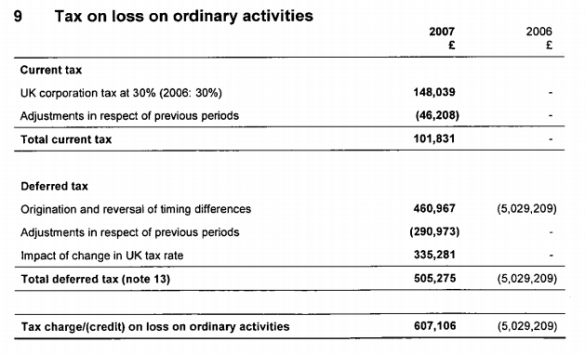 You will see that, for the year ending 31 December 2007 there was a total current tax charge of £101,831. Google UK Limited’s deferred tax asset (basically a limited right to reduce your tax bill acquired in past years) does not seem to have absorbed that charge.

All things being equal you would expect that tax charge to be met.

Although Google UK Limited has not provided a cashflow statement it does have a statement of current liabilities which provides:

So Google UK Limited expected, in 2007, to make a payment of corporation tax within a year.

And at a time when the Labour Party was in office.

Spread evenly amongst the population that £30bn would deliver to every man, woman and child almost £500 a year.

But it isn’t. It goes overwhelmingly to those who need it least. And that’s not mere happenstance. It’s the inevitable consequence of two deliberate policy choices: to distribute that £30bn through the tax system. And to fail to monitor what good it does.

Let me give some specifics.

This year we’ll spend £2.6bn per annum encouraging saving in ISAs. But the average ISA holder with annual earnings of more than £150,000 will get – through higher savings relieved from income tax at higher rates – well over 6 times as much tax relief as her equivalent earning between £20,000 and £30,000 per annum.

In 2013/14 the highest earning 1% of taxpayers made almost 13% of all contributions to pension schemes. Pension scheme relief costs £21bn in income tax foregone. But that 1% of taxpayers – roughly 0.5% of adults – will get even more than 13% of that £21bn because we give them a larger tax bonus than those who earn less.

HMRC doesn’t publish much data on how the benefit of these reliefs is distributed between rich and poor. By and large you have to stitch the statistics together.

But HMRC does track one particular sub-set of reliefs: “Allowances given as tax reductions”. It comprises, in particular, Venture Capital Tax Relief, Enterprise Investment Scheme Relief and Seed Enterprise Investment Scheme Relief. Remarkably Additional Rate Payers – those earning over £150,000 – receive 69% by value of those reliefs. That figure has risen every year since 2010/11.

More striking still, the highest earning 15,000 taxpayers – an almost homeopathic 0.05% of all taxpayers – netted 5.5% of total deductions and reliefs. Most will have seen six figure reductions to their income tax bills.

Why is this? Should we be concerned?

It’s hard to find sense in it.

We can make the same argument for ISAs. If a couple can afford to save what the median household earns (after direct taxes and benefits) – and that’s what the annual ISA limit for a couple represents – why do we spend money giving them incentives to save? If there’s money to be spent, surely we bolster the position of those who struggle to save rather than those compelled to by surplus income.

We don’t need to reward the wealthy for making donations to charity. The impulse to donate is a civic responsibility. It doesn’t need to be greased. Only the wealthy win, and the causes they prioritise. Good for Opera Houses; Youth Clubs, not so much.

These – I can put it no politer than ‘anomalies’ – have two related causes.

First, we deliver these reliefs through the tax system. It must be this that has led us unthinkingly to give most generously to those who have the highest earnings and so pay the most tax. But to achieve the public ends these tax reliefs serve does not require that we forego the most from those who pay the most.

That brings us to the second. We have no mechanism for assessing what public good we achieve with this £30bn. The absence means our political class need not confront the question. And what they can pretend they don’t know they can pretend they needn’t remedy. This state of affairs is convenient to them. Because the noise made by the losers from tax decisions tends to drown out the applause from those who’ve won.

But there is an answer. And a precedent.

Interest rates decisions were once heavily politicised. Were they still, now, in the hands of the Government the UK would be a more dangerous place. After seven years of near zero interest rates could any Government hold the line between depositor pensioners and the borrower working age population? But, devolved to the Bank of England, the political heat has simply evaporated.

As it was with interest rate decisions, so it could be with tax reliefs. Value for money assessments, decisions around functioning, decisions around shape; all these could be devolved to an independent body such as the Office for Budget Responsibility. Over time, and insulated from political heat, it could reshape tax reliefs to operate in the public interest.

Here’s what section 146(1) of the Political Parties, Elections and Referendums Act 2000 (the “Act”) provides:

(a) to produce, for inspection by the Commission or a person authorised by the Commission, any such books, documents or other records relating to the income and expenditure of the organisation or individual as the Commission may reasonably require for the purposes of the carrying out by them of their functions…

From this Electoral Commission statement it appears that the Commission did make such a request:

The Commission issued the Conservative and Unionist Party with two statutory notices requiring the provision of material relevant to its investigation.

A person commits an offence if he fails, without reasonable excuse, to comply with any requirement imposed under this section.

From the Electoral Commission statement it appears that the relevant person failed to comply with the request.

However, the Party has…. provided… no material in response to the second notice (issued on 23 March 2016). That follows the Commission granting extensions of time to comply.

Unless there is a “reasonable excuse” – and the Electoral Commission statement mentions none – the “relevant person” will already have committed an offence.

It makes no difference to the analysis if the documents are subsequently handed over – because there has already been a failure to comply with the request.

The “relevant person” is defined by section 146(9) thus

“relevant person”, in relation to a supervised organisation…, means… in the case of an organisation, any person who is or has been the treasurer or another officer of the organisation…

And by Schedule 20 of the Act a failure to comply with section 146(5) is punishable on summary conviction at level 5. Although my specialism lies elsewhere I understand the consequence to be that a fine of unlimited amount may be imposed: see here, here and here.

You may wonder why the Electoral Commission Statement makes no mention of this commission of a criminal offence. But no matter. Tomorrow I shall refer the matter to the Police.

It may be that a different, or further, offence has been committed under Schedule 19B paragraph 13 of the Act. I have, today, reported both prospective offences to the Metropolitan Police who will take a statement from me on Monday.