Back in February 2016, a then obscure MP called Steve Baker lobbied his colleagues to support Vote Leave’s application for official designation in the Referendum campaign. Here’s what he wrote:

He’s not amongst the EU’s greatest fans is Mr Baker. It should be “wholly torn down,” he said. It’s an “obstacle” to “free trade and peace among all the nations of Europe as well as the world.” In June of this year, Theresa May made him a Junior Minister in DExEU. But I digress.

The Times picked up the story. It was all just a misunderstanding, apparently:

And Vote Leave was duly given the designation, the Referendum was held, and the rest was history. Or may be.

In early August, shortly following the Referendum, the inestimable Marie Le Conte broke a story about a Mr Darren Grimes: Mr Grimes was a fashion design student with a modest presence on social media: around 6,000 Facebook fans and 4,000 Twitter followers. In the weeks leading up to the Referendum campaign Vote Leave had, or so we were told, given Mr Grimes £625,000 and he had received a further £50,000 from an unidentified individual. The total was just under the £700,000 Steve Baker’s email foretold.

Let me break off at this point to try and describe the law.

The relevant definition for whether an organisation is working as a puppet is this (and I’ve annotated it to make the legislation easier to read):

So, if you boil it down, and focus on the bit where there might be said to be doubt, the question is, ‘was there a “plan or other arrangement” between Darren Grimes and Vote Leave with a view to promoting a Leave result?’

These words “plan or other arrangement”, it hardly needs to be said, are incredibly broad. They don’t require a contract, or writing, or even an explicit arrangement. An unspoken understanding could, I think, as a matter of law, suffice.

So, was there such a “plan or arrangement” between Mr Grimes and Vote Leave?

What we know is this:

(1) a firm called Aggregate IQ operated out of an office above an optician in a provincial Canadian city;

(2) Darren Grimes, based in Brighton, eschewed UK and US based digital agencies and spent – £625,000 – with Aggregate IQ;

(3) so did many other Leave campaigners. According to the Telegraph, some £3.5m was spent with Aggregate IQ, including 40 per cent of Vote Leave’s £6.8 million budget;

(4) Darren Grimes reported to the Electoral Commission that the money he had spent with Aggregate IQ had been given to him by Vote Leave in three donations totaling just over £625,000, the first of which was made only ten days before the referendum;

(5) the donations had been in the form of settling Darren Grimes’ bills with Aggregate IQ – the money never actually passed through Mr Grimes’ hands;

(6) the money had been reported to the Electoral Commission as Darren Grimes’ spending. In other words, both he and Vote Leave were implicitly or explicitly asserting in their returns that there was no such “plan or arrangement”.

Faced with evidence of the donations made by Vote Leave to Mr Grimes, the Electoral Commission took up the cudgels (if that is an apt metaphor for what followed). It asked some questions of Mr Grimes, and Aggregate IQ. It may have asked questions of others.

What we now know, thanks to a FOI request, is the explanation Darren Grimes gave to the Electoral Commission. You can search the emails here.

Here is what Darren Grimes said:

This was in 8 August 2016. The trail then went cold before warming up again in March of this year as the Electoral Commission finally asked a key question. It elicited this further reply from Darren Grimes.

Of course, I do not know. But I would wager a substantial sum of money that this latest explanation – although sent in Mr Grimes’ name – was written by a lawyer. The language bears a lawyer’s precision. The lay-out of what is said to be Mr Grimes’ reply – setting out the question and then answering it – is very lawyerly. The register is different from Mr Grimes’ previous emails. And the care taken with the explanation: a sequence of events that, wrenched from context, seems plausible? That, too, is characteristic of a lawyer.

Memory is a malleable thing. It bends and it shapes. Sometimes it is you who does the bending, if only inadvertently, as you write the song of yourself. And sometimes lawyers do the shaping as they help a witness reconstruct his memory with delicately phrased questions and judiciously proffered documents.

The truth is found when you set those malleable memories against extrinsically determinable facts. And ask of different explanations which is likely to be real.

Here is one explanation; this is what Mr Grimes and/or Vote Leave invite us to believe.

Is that explanation more or less likely than this alternative explanation?

Vote Leave wanted to spend more than the law allowed, just as Steve Baker had foretold. It told Aggregate IQ that it would foot the bill for extra work via Mr Grimes. Mr Grimes was happy to channel Vote Leave money to Aggregate IQ because it would mean he would make friends in high places. 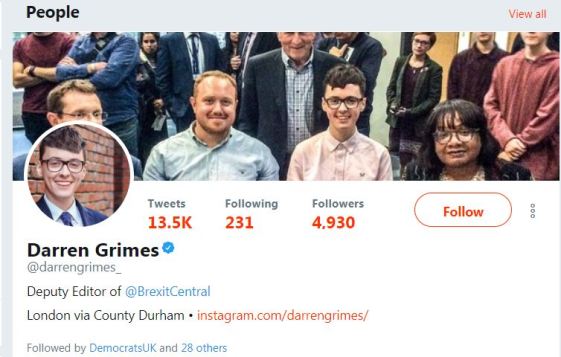 Faced with those alternative explanations the Electoral Commission made its choice.

As I explain below, the evidential picture I have is incomplete. But I think the British public deserves better than this from the Electoral Commission.

The Electoral Commission is the watchdog of our democracy. It should stand sentient and courageous. It should not accept an explanation which, for reasons I have set out above, seems to me to stretch credulity to breaking point. If and when it does so it undermines the law and jeopardises our democracy. It turns our regulatory regime into a fig-leaf; it delivers only the appearance of legality without the actuality.

There is one further piece of evidence in the cache: an extract from a letter sent to the Electoral Commission by Aggregate IQ recording the question and giving the answer.

You will note that, although the letter gives the name of Mr Grimes, it does not entirely answer the question. It does not go on to assert there were no other persons who instructed or commissioned or otherwise liaised with Aggregate IQ about the work carried out. Some of that ground may, however, be thought to be covered by the rather vague answer given to the subsequent question.

But it does not appear that the Electoral Commission followed up on this point.

It is right – and fair to Mr Grimes – that I say, explicitly: I do not assert that his explanation is false. What I have sought to do is set out the information that I have seen and that seems to me to be material and invite readers to ask themselves whether the explanation bears the stamp of reality. My opinion, based on what I have seen, is that it does not.

I should also say explicitly that the correspondence cache is incomplete and there may be further relevant explanations to which I am not party. If those are provided to me and I think they are material and relevant I will add them to this post.

There is other material in the cache which, in the interests of achieving some economy, I have not addressed here. I have set out above what seem to me to be the most material points.

[What follows is the text of my speech to the People’s March for EU earlier this afternoon.]

In 2008 we faced a crisis. Our financial system – grease to the structures that deliver us food and housing and employment – lay on the brink of collapse. But we rescued it and were saved a devastating depression.

And then we carried on.

And now we face another threat. And maybe we will and maybe we won’t leave the EU. But either way, in a decade’s time, there will be another crisis still.

A society in decline dies a thousand deaths.

And if you’ve travelled down from Liverpool this morning, if you live in Blackpool or in Sunderland, if you’ve come from Wales; if your infrastructure has been left to rot; as the South continues to thrive but your own wages fall; if you’ve waited longer to see your GP and longer for the bus to her surgery… society for you has died many deaths already.

2008 should have opened our eyes. But it didn’t and we fell back to complacency.

We’ve seen what happens when we leave it them to fix the problems. Why pick up a can if you can kick it down the road? Why choose the public interest if you can pursue your own? Why face the problems of tomorrow if you can take refuge in the past?

So what do we do?

In the 60s and the 70s the personal became political. Women looked to collective action for lives of quality. But now we must apply that adage in reverse. We make the political personal again.

We must, you must, take responsibility.

And there’s no universal prescription for what that looks like. You must find one yourself. But if you’re a student, maybe volunteer in a care home. If you’re wealthy and a parent send your kids to a state school so they know the lives of others. If you’re an empty nester work with a refugee charity to help another human being live a decent life. Look out for one another. Look local.

From our politics something better may come. And I hope that it does. But you can’t rely on these politicians to fix our problems. They haven’t and they won’t.

Still, here we are. Well over a year on from the referendum. Tens of thousands of us. And we’re engaged. We’re not complacent. But whatever happens next – whether we leave or we stay or we muddle through – don’t forget how the last 18 months made you feel. Don’t repeat the mistakes of 2008.

Be Jean Monnet, an architect of the EU: