Does it matter whether Milo Yiannopoulos’ promotion of far right ideas was, as he claimed, just to discombobulate the grandparents? It won’t have mattered to those who found themselves facing the sharp edge of modern fascism: the terrorism, the racism, the removal of agency from women. And it didn’t seem to matter to those, like Robert Mercer, who funded him. But it did matter to Yiannopoulos. A coquettish flirtation enabled him to avoid the scrutiny that a full blown declaration would require.

But we’re also right to ask them of those who seek similar change from the Left.

Novara Media is the vehicle of the closest thing the United Kingdom has to a Milo figure – Aaron Bastani (shown below, sans clothing). 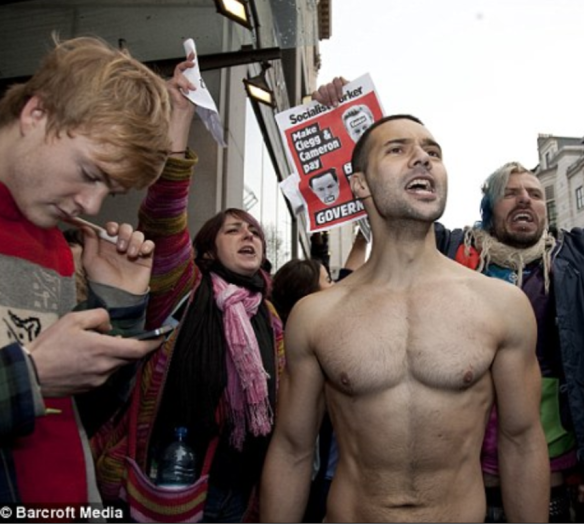 His antics – recent examples include suggesting we nationalise Airbus to stop it leaving the UK in the event of a no-deal Brexit and describing the Poppy appeal as “white Supremacist” – have earned him regular slots on the BBC.

But what makes him worthy of interest is his stance on communism.

Bastani is the author of “Fully Automated Luxury Communism” (apparently to be published by Verso Books in June 2019) and Novara Media offers for sale such merchandise as a ‘Fangirl Femme Tote’ (“I’m literally a communist”) and a “Tracksuit Communism” top. 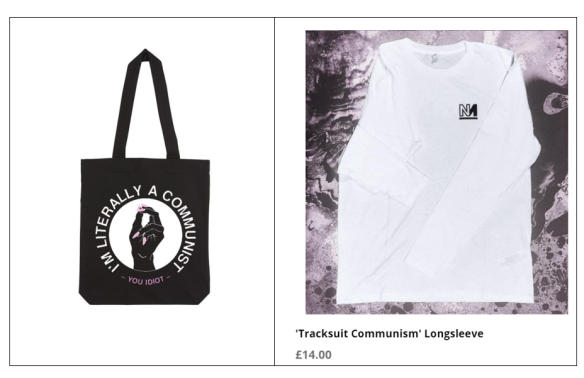 And he and Novara regularly – in a style familiar to Milo watchers – express an ‘ironic’ support for communism. Indeed, he has made a conscious choice to position his support of communism thus.

But although we know who funded Milo we don’t know who funds Novara. All we do know is that Novara has gone to extraordinary lengths – including apparent criminality – to keep its funding and ownership structure in the dark.

Novara is not a small operation. This is what the New Statesman reported in September 2017: 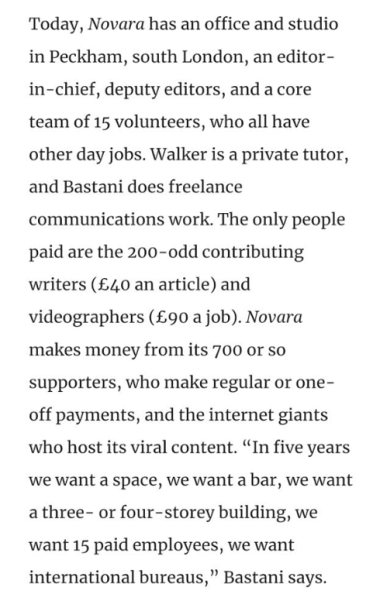 Only a year later, in September 2018, Novara reported a more than 50% increase in the size of its core team and that some of those team were now paid. 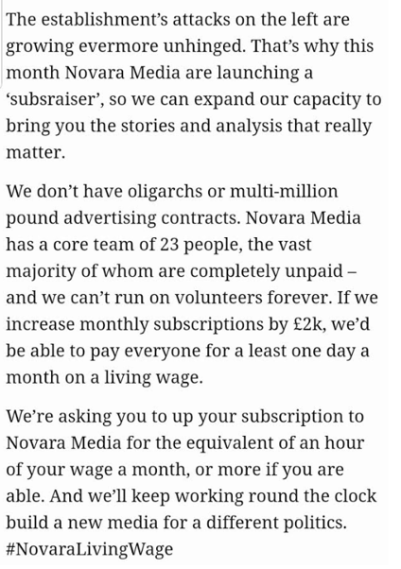 All of this will involve significant expenditure – Novara rents an office and studio in fashionable Peckham with associated operating costs, pays part of its enormous core team, pays writers and videographers, will pay web and database hosting costs, and so on.

Where does this money come from? Perhaps there is an entirely innocent explanation – but if there is it renders inexplicable the efforts Novara has made to avoid public scrutiny.

Bastani co-founded Novara Media in 2011 along with James Butler. The website www.novaramedia.com was registered in 2012. Between its founding and August 2016 there is little or nothing in the public domain about its ownership. In August 2016 Aaron Bastani started a company called Novara Media Limited (“NML”) with a single £1 share. In October 2017 the Registar, believing that the company was not carrying on business, wrote to NML. And on 9 January 2018 NML was dissolved. Did it ever actually conduct the Novara business? We have no way of knowing.

In an email exchange with me on 24 November 2018, Aaron Bastani told me that the company which now had responsibility for Novara Media was Thousand Hands Limited: 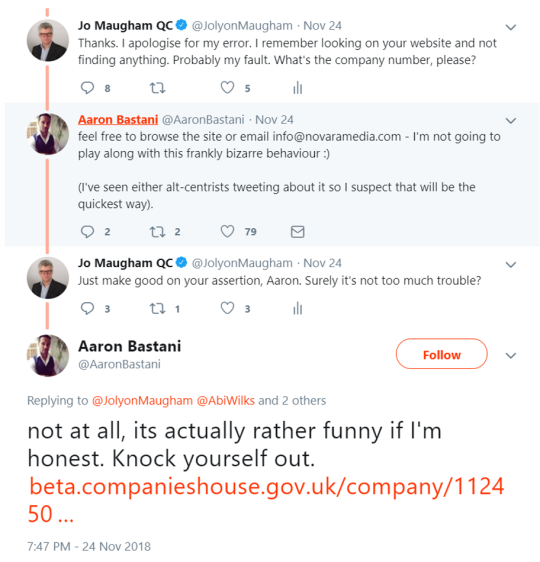 It is not clear why neither of the co-founders (Aaron Bastani or Patrick Best) have any interest in Thousands Hands Limited, either as owners or directors. It is not clear who carried on Novara prior to March 2018. Indeed, there is very little evidence, apart from Mr Bastani’s say so, that Thousand Hands Limited operates it now.

At the time of the twitter exchange set out above, the Novara Media website contained only one reference to Thousand Hands Ltd, in its personal data policy: 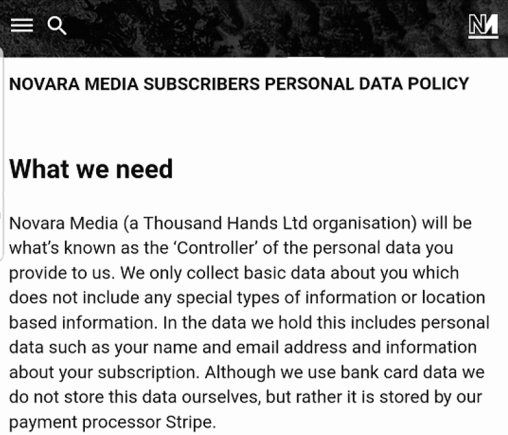 But at the date of writing, that reference has been removed.

Someone, somewhere has taken a deliberate decision to obscure Thousand Hands Limited’s connection with Novara – if such a connection in fact exists.

Its personal data policy, too, is with a legal chimera. And if you attempt to purchase something from Novara Media’s Online Shop, again, you appear to contract with the non-existent “Novara Media”.

This level of opacity is likely to involve significant illegality – if not criminality. I won’t run through those obligations in detail but most obviously the law imposes obligations on companies operating websites to disclose certain information. That obligation has been breached and, if Aaron Bastani told the truth when he said Novara was operated by Thousand Hands Limited, it is difficult to avoid the conclusion that a criminal offence has been committed.

Bastani reasonably asks, who funds organisations like the IEA:

But isn’t it about time he came clean about Novara Media which is pushing change far more radical than the IEA? If he is to use Novara Media and the the national platform given to him by the BBC ‘ironically’ to push communism, should we not know who funds it and him?

This morning six Scottish Parliamentarians and I return from the Court of Justice in Luxembourg to Scotland’s Highest Court, the Inner House of the Court of Session.

In Luxembourg we persuaded the CJ, in the face of opposition from our own Government, the EU Commission and the EU Council representing the 27 other Member States that the UK has the right, in accordance with its constitution, to withdraw the Article 50 Notice without cost. We are only now beginning to understand what a game changer the CJ decision is.

In purely neutral terms it puts another option on the table for MPs. But it also changes the political dynamics. Theresa May’s strategy is to run down the clock and seek to trap MPs between the devil of her deal and the deep blue sea of no deal. But this strategy is strategically holed because the CJ decision means MPs no longer have to choose between making political reality the PM’s personal conviction that what the people want above all else is to end free movement or the grotesque and unforgivable self-harm of no deal.

But there is still one question outstanding.

It is clear that two things need to happen. We need, first, to withdraw the A50 notice and, second, to change “exit day” in section 1 of the European Union (Withdrawal) Act 2018 (something which a Minister can do). But how do they happen?

On one view neither needs primary legislation. The PM can be compelled to withdraw the A50 notice and a Minister can be compelled to kick “exit day” sufficiently far down the road that it can be sorted out later in a legislative tidying up exercise by a binding motion of MPs. Let’s call this the Motion route. Some of the arguments for the Motion route are sketched here (in paragraph 13).

But which is right? The Government itself has at different times advanced both the Motion route and the Legislation route.

Neither route is especially technically difficult. I have set out below the text of a short Bill that it seems to me (please feel free to comment) would suffice were MPs to need to take the Legislation route.

So this morning we will respectfully ask the Inner House to let us finish what we started. We will ask it to set a short timetable for written and then oral arguments on which – the Legislation or the Motion – is the right route. If the Inner House agrees we are likely to adopt an amicus type stance in the arguments.

Of course, we do not know what position the Government will take. It may well be that it will just do what it did before the CJ – continue to stand on the silly pretence, in the face of political reality, that the question is purely hypothetical.

My own view, expressed with diffidence, is that the specific interrelationship between politics and the law that would come into play were Parliament to adopt the Motion route means it is likely to be sufficient. But best that MPs know for sure.

If you value the work Good Law Project does – work that most of our rather frightened establishment finds difficult to fund – you can support it here. Unless we secure adequate funding we are likely to be compelled to pull down the shutters.

1.— Duty to revoke notification of withdrawal from the EU