There’s no denying it’s hard to bring successful criminal prosecutions against tax evaders. The complexity of the tax system makes it tough to get a lay jury over the ‘beyond reasonable doubt’ line. And it’s not easy to get the evidence together. Tax havens don’t want to develop a reputation for making enthusiastic disclosures of the affairs of their banks’ clients because, well, those clients might choose to move their money elsewhere.

But having achieved a decent evidential foothold, you’d hope HMRC would take advantage? Wouldn’t you?

Yesterday Richard Murphy, the well known tax campaigner, pointed to one instance of apparent failure of this principle: you have a tax amnesty to encourage people you might not otherwise find out about to come forward voluntarily and put their tax affairs in order. But why would you offer an amnesty to those you already knew about? In her evidence before the Public Accounts Committee, Lin Homer said that HMRC had “encouraged” 500 taxpayers – whose affairs had been made known to HMRC through information on the Falciani disk – to take advantage of an amnesty (called the “Liechtenstein Disclosure Facility”) offering very low penalties on unpaid tax and immunity from criminal prosecution. These were 500 taxpayers whose affairs were non-compliant, which non-compliance we knew about, and we were offering them an amnesty. Seems odd to me.

But there’s a further puzzle. Forget the Falciani disclosures for a second. Back in 2012 we signed an agreement with Switzerland which presented a satisfying dilemma to non-compliant UK resident taxpayers with accounts there: either (1) agree with the Swiss that you would make a full disclosure of your affairs to HMRC and take your chances with swingeing penalties and/or criminal prosecutions or (2) preserve your anonymity and suffer an initial tax charge of 21-41% of your capital, together with further on-going tax charges and the threat of criminal prosecution in the future. (Although, for reasons unclear to me, if you took option (2) and kept your affairs secret, we promised the Swiss that criminal prosecutions would be “highly unlikely”.)

(Side note: a somewhat unappreciated aspect of the #SwissLeaks disclosures is that, as the Guardian reported, HSBC then set about selling to its individual clients a mechanic involving the interposition of a ‘special purpose vehicle’ between the clients and their accounts which gave to their clients a third option: do nothing.)

So, leaving aside those lucky HSBC clients, HMRC had you where they wanted you: (1) high initial tax charge, future tax charges and continuing risk (albeit for reasons unclear small) of criminal prosecution or (2) face the music at home.

And then? HMRC seem to have let everyone off the hook. They encouraged taxpayers to take advantage of the benefit of the Liechtenstein Disclosure Facility amnesty. This is what HMRC’s own Swiss-UK Tax Co-operation Agreement Factsheet says: 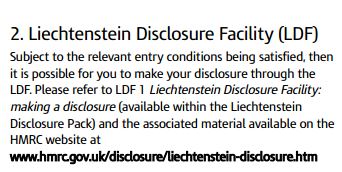 Here’s how Grant Thornton quite fairly sum up the choice offered to tax non-compliant UK residents with Swiss accounts:

5 thoughts on “Surely HMRC wouldn’t let you off the hook?”