The observation “No good deed goes unpunished” is usually credited to Oscar Wilde. But he took his inspiration from Aeschylus and Prometheus Unbound. Back in 2012 the Chancellor defied them both:

Budget forecasts revealed that this “simplification” of the tax system stood to raise £3.3bn. (Those few who were, sober, at the CIOT dinner last week will remember the warning to beware Chancellors bearing tax simplification gifts). But, quietly, this tax year the general personal allowance caught up with the age related personal allowance for over 65s (£10,500). Next year, assuming the Conservatives press ahead with their manifesto pledge to raise personal allowances to £12,500 over the life of the Parliament, it will catch up with that for over 75s (£10,660). And that bit of the income tax code that we call “income tax” will discriminate less against the young on the grounds of their age. Less, because we will still have the “married couple’s allowance” – worth between £322 and £835 a year – and one or two other quirks.

But that bit of the income tax code that we call National Insurance Contributions will continue to discriminate. And profoundly. Once you’re over the state pension age, your employer no longer deducts NICs from your earnings. Compare the rate of tax on earned income paid by an employee over state pension age with that paid by a worker under that age (in parentheses) in the present tax year:

Can this difference be justified?

Certainly not on the ground that National Insurance Contributions are the means by which you pay for your state pension so that once you’ve paid for it you can stop contributing. True it is that to receive the full basic state pension you have to pay NICs for 30 years. But NICs don’t fund the state pension; paying them for more than 30 years doesn’t increase your entitlement; and nor does paying more of them during those 30 years. Moreover, the employed can pay, retrospectively, for missed years for £14.10 a week – and the self-employed for £2.80 a week.

It can’t be justified, either, on the grounds that it is necessary to equalise post-tax incomes between generations.

As the chart below reveals (drawn from this data), different levels of taxation merely exacerbate the income advantage enjoyed by the old over the young. 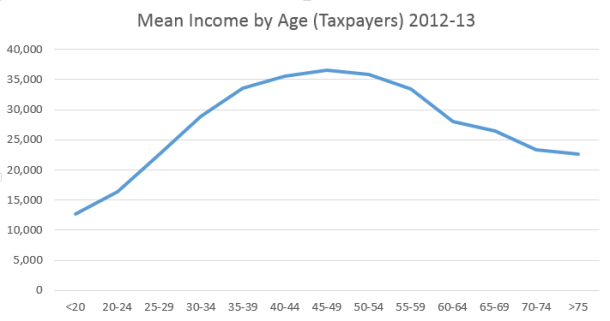 Moreover growth in pensioners’ incomes has far outstripped that of those of the rest of the population. According to the ONS:

Other potential justifications? I am fresh out, I am afraid.

Following the Chancellor’s 2012 announcement there was a little pecking at his liver. Ros Altmann, then Director General of Saga but now Baroness Altmann of Tottenham and Pensions Minister, described freezing age-related pensions announcements as an ‘outrageous assault on decent middle-class pensioners’. But, as this chart from Liam Byrne via House of Commons Library/IPSOS MORI shows, the Government escaped meaningful punishment.

A further good deed the Chancellor might do on 8 July would be to abolish the NICs exemption for those above the state pension age. Or he might – as with the married couples allowance – restrict future entitlement to it to those presently entitled to it: if you don’t get it now, you won’t get it in the future.

That would be an undoubted good deed. And, like the Granny Tax, it’s early enough in the electoral cycle for it to go unpunished.

[I have edited this piece to remove a speculation as to the potential cost of such a measure].

11 thoughts on “Age related biases in the tax system”