Here’s what the FT reported this morning:

Ouch. That doesn’t sound so good. More tax cuts for multinationals must be the answer, right?

That’s what you’d think from the responses from Government:

But is that really what the KPMG ‘league tables’ show? Do we really need “further improvements” (for them, that is. You and I would probably describe it as collecting even less tax from multinationals)?

But when I take my three daughters into an ice-cream parlour and ask them whether they’d like ice-cream they tend to say yes. There’s not a single question in the KPMG report which seeks to assesses whether those tax breaks are in any way decisive of a decision to invest here or not.

This is close as the reports gets:

You don’t believe me? Well, here’s what the selfsame KPMG survey showed in 2014 (where they did disaggregate ‘high’ and ‘some’): 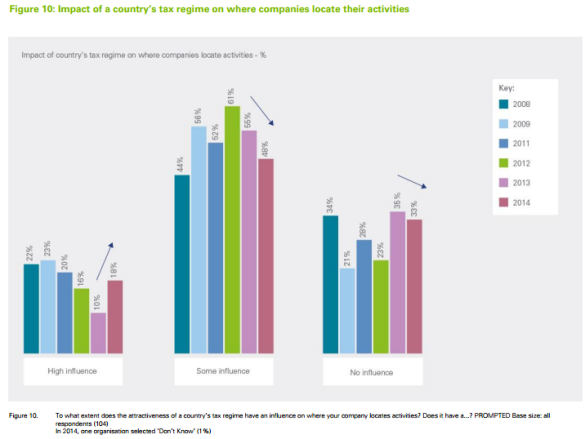 And the report contains no analysis at all of the costs and the benefits for us as a nation of cutting the tax burden on business.

Nine years ago the rate of Corporation Tax was 30 per cent; today it is 20 per cent. In his 2015 Budget Osborne announced plans to cut it further to 18 per cent. That cut alone will cost £2.5bn in its first year. And that’s not my number, by the way. It’s HM Treasury’s own number – you can read it at Table 2.1 here. So “tax attractiveness” carries a very meaningful cost.

And the effect on Foreign Direct Investment in the UK – not the only measure of success, granted, but perhaps the one most applicable to the KPMG survey? Here’s the ONS’s chart. 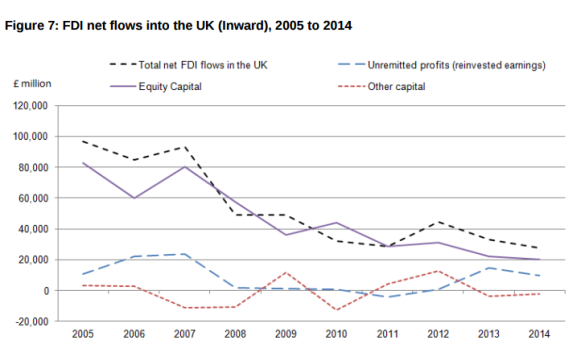 You might think the KPMG report is a naked pitch for business to pay less tax. Dressed nicely for dinner, for sure, the better to be able to engage policy-makers and the electorate. And journalists. But still, just a pitch.

What do we actually get for foregoing the tax revenue – the “further improvements” described by Treasury? The effects of the greater “tax attractiveness” described by KPMG? And is it worth it?

We have no idea.

7 thoughts on “The UK’s tax competitiveness”