This may have passed you by. Christopher Chandler, and members of the Legatum group (“Legatum”), he founded, have been seeking to silence his critics.

Here is an apology published by the Guardian:

That apology was tweeted out by Legatum with this commentary: 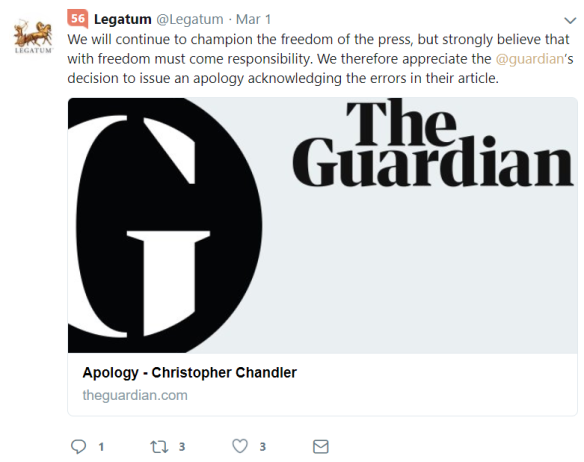 But they didn’t stop there.

Legatum also threatened to sue a small online political site ‘Left Foot Forward’ causing it to issue a retraction. I am also aware that legal proceedings have been threatened against a tiny pro-EU campaigning organisation. And there may well be others.

You should read Left Foot Forward’s retraction. This are matters of real triviality. Is threatening to sue a modestly sized website the behaviour of a group which “champions the freedom of the press”? Or is it the conduct of a group which is perfectly prepared to use its wealth and power to suppress criticism of the man it identifies as its founder?

I ask because, back in December last year, Legatum issued a statement containing a false and ugly smear of me:

At the time, I stated that that allegation was in error. And I asked Legatum to specify what “dirty tricks” I was guilty of. 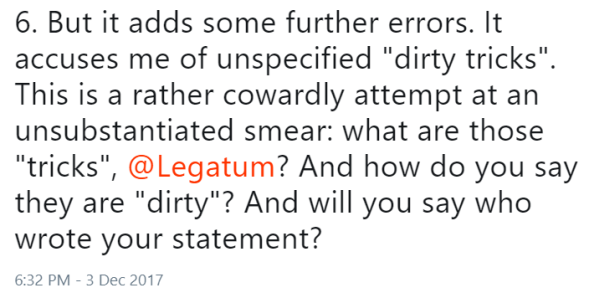 That request was ignored. Was that the behaviour of an organisation which believes that “with freedom comes responsibility”?

When I saw that an apology had been demanded of the Guardian for its treatment of Christopher Chandler I wrote to him. You can see my letter here.

I referred to Christopher Chandler’s objection, as revealed by the Guardian’s apology, to the accusation of hypocrisy. I referred to Legatum’s false and ugly smear of me. I assumed Mr Chandler would want that smear to be withdrawn. And for an appropriate person at Legatum to apologise for it. And I undertook to keep the apology private. I did not seek damages. I did not seek his or Legatum’s embarrassment. I asked him to behave honourably and decently.

Some days ago I received this response.

You will note it is written on behalf of the “Legatum group of companies” to whom it claims, falsely, that I wrote. Christopher Chandler, who sets great store by his reputation, has simply not bothered to respond.

(1) of the “dirty tricks” smear, it claims (absurdly) that it was not directed at me;

(3) it accuses me of hypocrisy in relation to my conduct on tax avoidance.

Let me say that I am happy to defend my conduct and I accept it is a legitimate matter for reasonable open public debate. I have addressed my position on tax avoidance here. And I am happy to confirm I took advice from a QC specialising in charity law before expressing the view I did that the Legatum Institute’s conduct was likely on the wrong side of the law.

Legatum, on the other hand, has used its money and the power that comes with it to stifle criticism of Christopher Chandler advanced by media with even modest reach whilst claiming to “champion the freedom of the press”. Christopher Chandler has failed to apologise or acknowledge I am entitled to an apology for a false and ugly smear whilst Legatum trumpets the claim that “with freedom must come responsibility”. Christopher Chandler has objected to suggestions of “hypocrisy over Brexit” but Legatum behaves hypocritically when it comes to press freedom.

Legatum’s record suggests I may face legal threats or worse for writing this. But it and Christopher Chandler are powerful and divisive and we must be free to discuss them and, if they are hypocritical, we must be free to call them out.

One thought on “Legatum and Hypocrisy”