Every year HMRC publishes its estimate of the so-called Tax Gap.

Another important thing to note about the Tax Gap is that it’s reasonably stable in both absolute and relative terms. 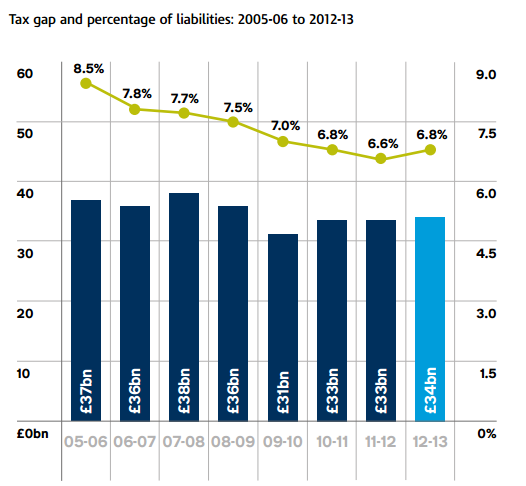 And HMRC are generally thought to be doing a pretty good job in measuring it. Here’s the NAO late last month:

Of course, it’s theoretically possible that HMRC and the National Audit Office and the IMF are all wrong and the Tax Gap is massively understated. Possible, but unlikely.

I apologise for labouring these points. But they’re important because, along with £93bn of so-called Corporate Welfare – which I’ve addressed at some length here – closing the Tax Gap forms a central plank of so-called Corbynomics.

Here’s what Corbyn says about it: 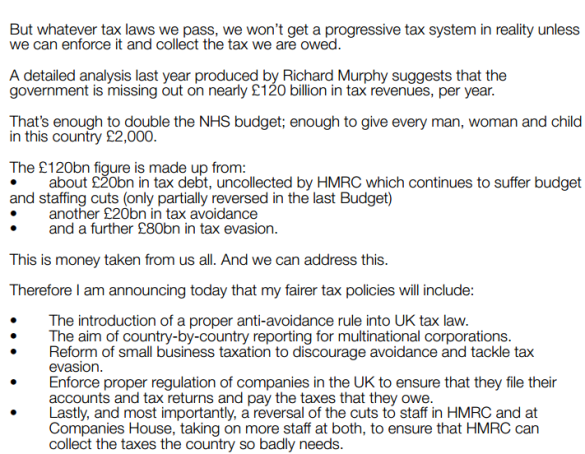 So is there really £2,000 for every man, woman and child in the country in closing the Tax Gap?

Here’s how you get to that conclusion in three easy steps.

(2) The reason the Tax Gap is where it is is because it’s extremely difficult to close. Every Government ever has come into office saying it will tackle avoidance and evasion – but still we have a Tax Gap which is reasonably stable in amount. There are only two explanations for this. Either every Government ever has deliberately chosen to leave the Tax Gap where it is. Or try though you might a certain amount of leakage is inevitable and all you can hope to do is narrow the gap a bit. Those are your choices – and only one of them is plausible.

(3) Some other number might measure some other thing. It might measure what Parliament could levy if it changed the law. And that other number might even measure that thing plausibly. But raising £2,000 for every man, woman and child involves identifying what that change in the law is – a new window tax for example – and identifying how much it will raise. The extract from Corbyn’s manifesto given above – purportedly supporting the £120bn yield – doesn’t identify any new tax. And Corbyn’s record on calculating yield is poor: I give an example here.

So what use, then, is the Tax Gap? Well, HMRC tell us:

The mundane truth, I’m afraid, is that it’s a sophisticated performance metric for HMRC. It measures how well they’re doing and where they should target their resources.

The Tax Gap is not a serious tool for making broader economic policy. It is no magical pot of gold that will obviate the need for close engagement with the choices inherent in being in government. And it’s not a basis upon which you can pitch to a sentient electorate. It just isn’t.