This morning Facebook UK announced – via the BBC’s Kamal Ahmed – that it would start booking sales in the UK. Here’s what they told the BBC:

What this means in practice is that Facebook UK’s taxable UK profits will cease to be, as previously they were, a simple mark-up of staff costs (a fact I revealed here).

Instead they will be, in part at least, a function of the value that is generated in the UK by those staff. In principle this should mean higher taxable UK profits.

So, welcome news. But (and you knew I was going to say this) let’s not get carried away.

First of all, Facebook UK Limited appears from its accounts to have three activities in the UK:

The “marketing services” and “engineering support” – which you might think of as maintaining the Facebook machine and developing new bits of it – activities will continue to generate UK taxable revenue only on the basis of what the staff cost plus a small mark-up. We should expect these bits to lead to materially no UK tax liability now or in the foreseeable future.

Second, it’s important to note that, like Google, none of the profits that the Facebook Monolith – i.e. if you assume a world in which what is economically a single entity is taxed like a single entity – makes on UK sales will be subject to UK corporation tax. Unlike Google we can’t know precisely how big those UK sales are – but they are very likely to be billions. What is taxed instead is a combination of fragments of deemed profits on UK costs and deemed profits on deemed value added by a limited number of UK staff. You don’t need me to tell you this ain’t what a sensible corporation tax system looks like.

Third, Facebook has considerable reliefs available to carry forward. You can see that from here: 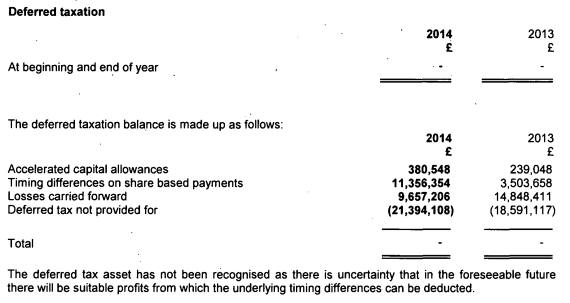 Previously Facebook UK didn’t bother to recognise these sums (effectively comprising rights to reduce future tax bills) as assets because they didn’t think they’d ever have any UK corporation tax liability to pay. This might now change – but regardless we should expect it to be a good while before today’s deal results in any real cash moving from Facebook UK to HMRC.

So although this morning’s announcement has been well handled in PR terms, it seems to me that it is unlikely to be especially meaningful in terms either of actual cash passing from Facebook or in terms of its tax liability. Facebook UK’s last published accounts disclosed a payment of £4,327. I wouldn’t bet on today’s announcement resulting in any meaningful change.

Another important and related aspect to note is that what Facebook UK have announced today is a forward looking change – effective only from April 2016.

Facebook UK Limited have refused to confirm or deny that they are under revenue enquiry for years up to now – but it’s clear from their accounts that they are.

Of course we can’t know that these claims relate to how they fragment their sales and engineering businesses to minimise their tax liability. But the Google experience suggests that it’s a pretty decent guess they do.

And nothing in today’s announcement deals with these enquiries. Nor the period after them, from April 2015 to April 2016, when the Coalition’s diverted profits tax applied.

But likely it won’t be until October 2016 at the earliest – when we see Facebook UK’s accounts to 31 December 2015 – that we gain any clarity about past years.

What, finally, about the Diverted Profits Tax?

I understand that, like Google, Facebook regards its tax planning as robust enough to withstand a Diverted Profits Tax challenge. But they do accept that it adds tax risk to their business model. And it is a combination of that added tax risk and a response to public perception of them as tax avoiders (despite HMRC’s hugely unhelpful Policy Statement of earlier this week) that is causing them to book at least some real profits in the UK.

This is a real credit to those who have been campaigning for tax justice – through our actions we can achieve  what Government is either unable or unwilling to.