Thanks to several newspapers, I was yesterday given a preview of information provided by David Cameron to the press on his tax returns.

The numbers themselves are relatively unsurprising.

So that my readers can see them I have cut and pasted below an extract from what Downing Street provided to the newspapers: 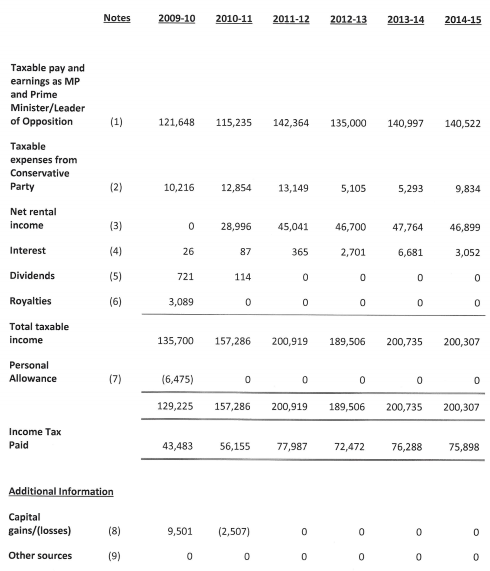 But does the exercise succeeded in delivering what is likely to be its objective? To improve our understanding of the Prime Minister’s financial affairs and quell speculation of hypocrisy?

The first and most important point to make is that the Prime Minister has not published his tax returns. He has provided a sort of dance-of-the-seven-veils version. He’s shown you quite a lot of what you might like to see – but not all of it. ‘What else is there?’, you are bound to ask. Why can he not show us his actual tax returns? If the objective really is to improve transparency – you really don’t want me to push my metaphor – he ought to have followed John McDonnell’s example and published his full tax returns.

And you’re not made more comfortable when you come to look at who has provided the information.

It comes from a firm of accountants, called RNS, under cover of a letter, addressed to the Prime Minister, (the “Cameron letter”) which provides:

But unlike the Goldsmith letter, the Cameron letter has no accompanying Press Release.

Zac’s Press Release made it very clear that the letter was from Zac’s accountants:

But we are not told, and do not know, whether the accountants that wrote the Cameron letter were his. Reading it, and the notes provided with it which talk about what the authors “understand” about his expenses, I have a sense that it was written by accountants other than Mr Cameron’s. If this sense is justified, if the letter comes from someone who isn’t Mr Cameron’s accountants, it takes us a (difficult to understand) further step away from actual transparency.

A couple of other points about form.

The letter does not pretend that any exercise has been done over and above the mechanical one of extracting information from past self-assessment tax returns. I mean no disrespect when I say it involves no professional judgment by RNS.

But it does come from a professional firm – and that has useful consequences.

The numbers are what the numbers are. The Prime Minister has not invited us to take on trust what he says they are; instead he has delivered them in the form of a letter from a certified professional bound by a code of professional ethics. My view, and the view of most, is that it couldn’t properly be suggested these numbers are false even were they to be given by the Prime Minister himself. But I know that some would and so having a professional say that they represent what is reported in his tax returns might be thought to be a sensible precaution.

The final point to note is that the letter is addressed to the Prime Minister, not to anyone else. The firm of accountants will have the Prime Minister as its client, not anyone else. This tells us something – this is not the place for a detailed analysis of the law – about who the firm intends should rely on the letter and to whom it owes its professional duties. Again, let me be explicit, I do not say any conclusion should or even can be drawn from this, but I might have done it differently.

Turning to the detail of the numbers, it is noteworthy that David Cameron received £6,681 in interest from what we are told is “interest on savings with a UK high street bank”. If you assume a (relatively high) 2% rate of interest and that the interest is before deduction of tax, this implies he had during the course of the year an average of £334,050 sitting in his bank account.

The notes also record that David Cameron has voluntarily overpaid tax on occasion:

And has donated royalties from his book to charity:

Some will say that this voluntary largess is a privilege of wealth.

But having myself lived in poverty and now in wealth I very much appreciate that wealth enables me to spend to nurture my self-sense of moral well-being. And I remember, too, the moral humiliations that poverty brings. But whatever your view, mine is that we must recognise that these are careful and responsible acts that many do not undertake.

The capital gains and losses are described by the notes as being from the sale of “units in Blairmore.” But “Blairmore” is not a legal entity – or a description of anything – and all the lawyers I know, and accountants too, would have used its proper name. My sense of slight unease is not diminished when I contrast the clumsy “Blairmore.” with the full technical description elsewhere in the notes of the “Income Tax (Earnings and Pensions) Act 2003”. And it is positively exacerbated when I recall that in his ITV interview, David Cameron starts off by talking about the asset that he sold as a “unit trust” and then several minutes later describes it as “Blairmore Investment Trust.”

The notes also state that:

This is, perhaps, rather bold of RNS. It cannot know what other sources of income or gains the Prime Minister has. It can only know what it has been told.

But leaving that aside, the substance is consistent with various other statements that the Prime Minister has made about not having any offshore interests himself. These are set out here.

However, the statement does nothing to address the concern that the Prime Minister, his wife or children might benefit in the future from a discretionary trust. (I should say explicitly, to be transparent myself, that earlier in the week I reached a different view but I now regard myself as having been precipitous to do so).

The closest the Prime Minister has come is to say this:

But an offshore discretionary trust for his children is not one which “the prime minister, Mrs Cameron or their children will benefit from in the future.” It is not a future interest in possession trust in respect of which it could fairly be said that those entitled will benefit. An offshore discretionary trust is one from which they only might benefit, depending on how the trustees choose to exercise their discretion.

There are two points that makes this gap in the Prime Minister’s language interesting to me.

The first is that it has been left.

The Prime Minister could very well have said:

As far as I am aware, there neither is nor has been any non-UK discretionary trust of which the Prime Minister, his wife, or children are or have been potential beneficiaries.

but he did not.

The second is that had you asked me or other tax professionals several weeks ago what arrangements you might have expected Ian Cameron to have made for his family, an offshore discretionary trust would have featured heavily amongst the responses. It’s a perfectly natural arrangement for someone with extensive offshore interests to enter into. It would be surprising if someone who had shown an appetite for complex offshore arrangements involving exotic tax haven locations such as the Bahamas and Panama, and really rather ugly features such as bearer shares, had opted for tax simplicity in the disposal of his estate.

So although it is speculation, and although I do not want to speculate in a destructive way, my own personal judgment is that it is reasonable speculation.

The financial acts that I can see, and of course there are many I cannot, and that are acts of the Prime Minister, are by and large decent and responsible. The financial acts that make me uncomfortable are the acts of his father, from which of course David Cameron benefits, but they are not his acts and he did not choose them. And the weaknesses of this exercise, if you regard it as an exercise in enhancing transparency, may perhaps stem from a desire to obscure the latter.