Here are some facts about Fixed Odds Betting Terminals.

For bookmakers they “are one of the most profitable forms of high street gambling” (see paragraph 1.190 here). In September 2014 there were 35,059 such machines (see Table 2) generating an average revenue per machine (amounts staked minus prizes) of £46,315 (see Tables 2 and 3).

They are known to be used by drug dealers to launder money, an issue that Government recognises.

A 2005 report by Europe Economics for the Association of British Bookmakers showed that a bookmakers’ gross margin on FOBTs was 2-3% (see paragraph 1.2.4 here), a figure consistent with March 2012 data published by the Guardian (showing a return of 97%). Taken together with the average revenue per machine, this implies an average of over £1.5m per annum is wagered on each machine. Of course, criminals have to pay people to feed this money through machines but they still look (to this uneducated eye) a cheap way to launder money.

We also know that Licensed Betting Offices (or LBOs) are clustered in areas of high deprivation: 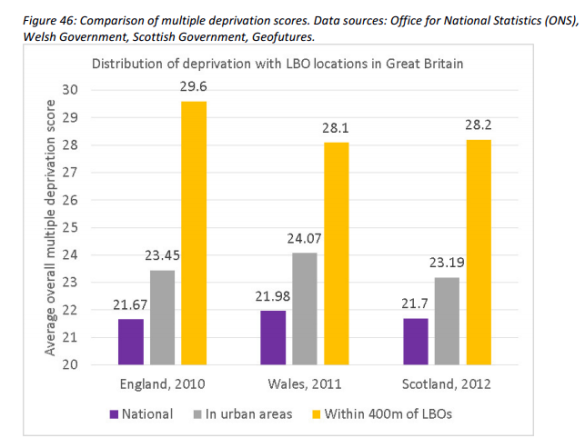 And in areas of high unemployment: 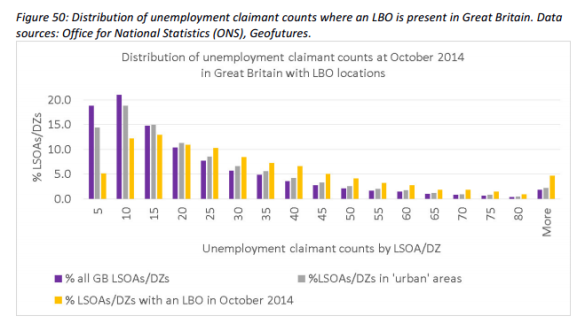 (both of these charts from this report by the Responsible Gambling Trust which works closely with the Gambling Commission). And that substantially all revenue generated by FOBTs is generated in bookmakers (£1.613bn of £1.623bn see Tables 3 and 8 here).

And that leaves net revenue for bookmakers (after machine games duty) of a little over £1.2bn.

Bookmakers gain £1.2bn. Government gains £400m. Those revenues come (in unknown part) from money launderers. They also come from gamblers, 50% of whom show characteristics which might indicate they are at risk of harm. And the poor are disproportionately represented amongst those gamblers, a factor that bookmakers take into account in siting their shops.

I should also recognise that bookmakers say that these gambling winnings support employment and so deliver employment taxes.

All Government is about making choices. We make these choices when we decide how hard to clamp down on the money laundering which primes the UK property market bearing in mind that the structures favoured by money launderers deliver unexpectedly high revenues to Government. We make these choices when the College of Policing decides that an answer to the question how “to deliver policing in an age of austerity” is to accept revenues from the Saudis. We make these choices when we decides how aggressively we want to pursue the low rates of corporation tax that have been described by one academic (reasonably, in my view) as an attempt “to become a tax haven” – but which are expected (reasonably, in my view) to deliver increases in the size of the UK tax base.

I don’t want to stand on a high horse and pretend these choices are easy. But an equation that delivers modest (in exchequer terms) amounts of revenue to the Government, substantial amounts to bookmakers, where that revenue is drawn disproportionately from the pockets of the poor and the unemployed, and which facilitates money laundering, doesn’t look like a good choice to me.

2 thoughts on “Some facts about Fixed Odds Betting Terminals”